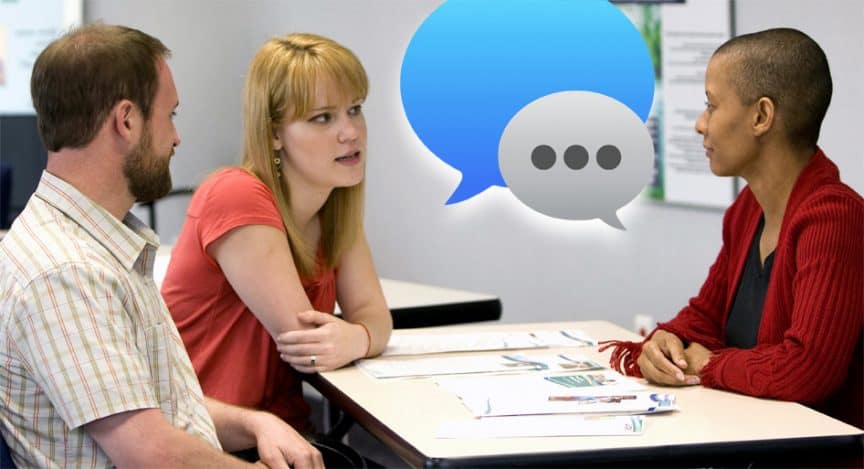 When I was a school administrator, the most frequent complaints I received were around communications. “Why wasn’t I told earlier?” asked a dad unhappy with his child’s report card. Then, less frequently, a mom would complain that a teacher communicates too much. “I don’t want to hear about every bump in the road”, she might say after the umpteenth family dinner has been interrupted by a teacher’s call about some triviality. When a parent does not like the message, how it was communicated will always be wrong! Nevertheless, good decisions about key elements of communication increase the likelihood of positive outcomes. One important consideration is the medium. Is an email or text, a phone call, or a meeting most likely to be effective?

Emails and texts are quick and convenient. One can review drafts for clarity and tone. They create a record, which may be important if what was said or promised is later disputed. Unlike phone calls, the message can be sent and read at any convenient time.

However, emails are very dangerous, and I think should be reserved wherever possible for non-controversial information. If the topic is sensitive, unless one gets the tone exactly right – and even if one does – the message can inflame the situation. An angry parent can easily forward the message, along with his scathing comments, to five hundred of his best friends, creating a massive headache for the sender and the school. I have spent an inordinate amount of time trying to contain the damage from over-copied emails.

When receiving an angry email, I sometimes tried to reduce the chance of such escalation by emailing a simple acknowledgement, and promising to follow-up with a more substantial reply. That follow-up will be a phone call, or meeting, or “snail-mail” letter.

Finally, there is the problem that senders of emails and texts expect instant responses. A parent may email in the morning when the teacher is in class, and be annoyed when she does not receive a reply until that evening.

Phone calls too have their advantages and pitfalls. They allow for a conversation rather than the one-sided transmission of a message. One can immediately correct any misunderstanding or provide needed clarification. The whole exchange can have a more personal feel.

However, one needs to be aware of the difficulties associated with phone calls. When receiving a call from a teacher or school, many parents panic, thinking that there must be a serious problem. Particularly if calling during the school day, one needs to begin by assuring the parent that there is no emergency, that their child is fine. Once reassured on that point, the usual next assumption is that there is a work or behaviour problem. The reflexive response of many parents is to become defensive, and to deflect the blame. The messenger may become the target. If a call is indeed about a behaviour or work problem, I have found it helpful to frame it as a request for advice from the parent about how best to help the child, acknowledging that it is the parent who knows her child best, and is the expert on what works best with him.

Timing of phone calls is especially sensitive. As one gets to know the parents, one will become aware of their preferences. Most do not want to be called at work, however some do. One should avoid dinner hour, or later than, say, 8.30 at night. Parents’ religious holidays should not be disturbed, neither should their (nor your!) weekends.

Unless a parent specifically asks that one not call their cell, I prefer not to call the home phone. The parent is who I want to talk to, or leave a message for, not another member of the household. If the call is not answered, one should always leave a message specific enough to allay the typical fears described above, but probably not much more specific than that. If the call is about a problem, a very powerful way of encouraging parents to return the call is to frame it as “I would appreciate your advice on a situation we are dealing with.” Most people are flattered by such a request, and quickly respond.

Face-to-face meetings are usually the best way to address sensitive natters. The non-verbal signals from all parties convey much information, and can contribute to a positive atmosphere. This is especially true when the parent and teacher and/or administrator do not yet know each other well. However, a meeting request may not be received favourably depending on the circumstances of the parent. A single parent working long hours in a demanding job may find it very difficult to come to a meeting, and may resent being asked to if he feels that an email exchange is sufficient.

Who is to be included in a meeting should be carefully considered. When the topic of the meeting is important or sensitive, it is usually best to meet with both parents together. Too often one thinks an issue has been resolved after meeting with one parent, only to have it reignited after that parent has discussed it with the other. Of course, it may not be possible for both parents to attend, and sometimes it is undesirable. In some families, one parent will deal constructively with a situation, while the other merely inflame it. Separated or divorced parents may not live in the same city, or work well in a meeting together.

Whether electronic, by phone, or in person, the tone of communication always needs to convey that one really does see parents as partners, not as adversaries, or as nuisances interrupting one’s real work. When parents feel genuinely respected by teachers and administrators, trust develops, and communication becomes easier.